San Giorgio di Valpolicella, or Ingannapoltron, is part of the territory of Sant’Ambrogio, one of the five towns that constitute the Valpolicella Classica wine producing region, at the foot of Mount Solane. It is situated on the top of a rocky outcrop, built around its church, of the same limestone on which it lies. San Giorgio is beautifully surrounded by the vineyards and olive groves of Valpolicella, not far from the ancient quarries from where came the stone with which the Arena and other monuments in Verona were built, and it enjoys an unspoilt natural environment and breathtaking 180° panorama ranging from Lake Garda, to Verona, from the whole Valpolicella to the Po river valley. San Giorgio is often included in our wine itineraries in Valpolicella.

When driving through the west side of Valpolicella whoever raises his gaze is attracted by a little mountain characterized by a bell tower. Approaching it, when it seems that you have almost arrived, you suddenly realize how you still have to cover quite a few winding lanes. Ingannapoltron, as local people refer to San Giorgio, literally means “deceiving the lazy”. 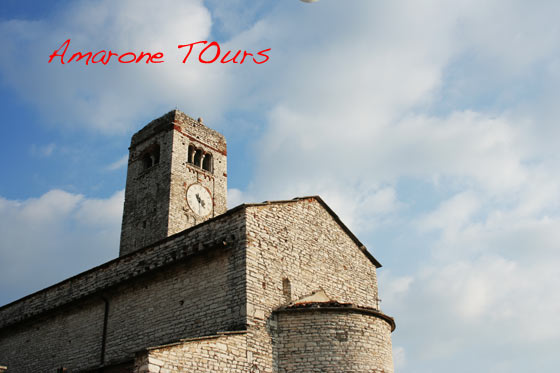 The village, a handful of houses grouped around the ancient parish church, appears as it was in ancient times, a sort of natural fortress that could be reached only after a long and tiring walk.

Its history goes back to the prehistoric age when it was inhabited during the Iron Age by Reti populations around 1st millennium b.C. Between 5th and 4th century b.C. the area was also populated by Arusnati, an autonomous population with its own laws and religious cults. San Giorgio gradually became the religious center of the surrounding territory. The masonry block next to the church of San Giorgio and a deposit of votive offerings representing terracotta divinities seem to prove that in San Giorgio there must have been an important worship temple. The culture of Arusnati, gradually merged and was then assimilated by the Roman colonization that inexorably spread in the whole region.

With the barbaric invasions at the end of the Roman Empire and the beginning of the dark ages, the area was almost forgotten. Christian religion gradually spread and on the ruins of the Arusnati temple was built the first church that incorporated many elements of the pagan sanctuary, in particular the altar dedicated to the Sun and Moon now placed at the base of a column in the nave.

The Chuch of San Giorgio

The church was built here around the 8th century with the same local stone used for the houses that surrounds it. It has a double apse, quite unusual in Italy but common in many churches of central Europe. Like probably the old Arusnati temple, the church had parochial authority and jurisdiction over an extensive portion of western Valpolicella.

The structure of San Giorgio, rather narrow for its lenght and with the nave twice as wide as the side aisles, is typical of churches of early christian origin.

One of the masterpieces of San Giorgio is the ciborium, a sort of stone canopy above the altar, carved during the reign of Liutprand king of Lombards in the 8th century by sculptor Orso, whose name is engraved in the ciborium itself.

The church is also decorated by simple but fascinating frescoes datable to the late 11th, early 12th century. The painting that adorns the west apse depicts Christ Pantocrator in severe attitude. He is surrounded by the symbols of the evangelists.

Other frescoes from the 13th century decorate the wall on the right, representing The Last Supper.

Next to the church, the cloister, conserved on three sides, dates from 12th century. The center of the parochial complex, it was probably originally enclosed on all sides by the church and other buildings partially demolished to make way for the new parsonage. One of the most interesting characteristics of the cloister is the series of capitals of the mullions, all cut in different forms representing grotesque animals and vegetable forms.

San Giorgio owes part of it fame also to the splendid stone, which was quarried here from ancient past on Mounts Pastello and Solane and their slopes. A series of quarries have supplied stones and marbles which have made Verona famous. Many of these stones where once transported to Verona and beyond along the river Adige which flows at the foot of these hills and which once, thanks to an efficient network of channels, connected Valpolicella with the shore of the Adriatic sea.

San Giorgio can become an important stop, far from roads and noise, of our wine tours in Valpolicella. From San Giorgio you can enjoy a breathtaking panorama that embraces Verona, the western side of the valley covered by vineyards, la Grola, one of the most important “cru” in Valpolicella, and behind it, lake Garda. In San Giorgio there are also few nice bars and restaurants where you will be able to enjoy the tasty local food such as soppressa (a characteristic type of pork salami with garlic), polenta brustolà (grilled corn flour), paparele en brodo con i figadini (noodles with chicken liver) and pasta e fasoi (pasta and beans), lesso misto con pearà (mixed boiled meats paired with sauce of bone marrow and pepper), stracotto di musso (braised donkey), all dishes to be paired with Valpolicella wines, Amarone and Recioto.

Do not hesitate to contact us for further information regarding San Giorgio, or to book your wine tour in Valpolicella or other wine producing areas in Verona: