Here is a quick, simple and useful guide to Amarone, its storage and serving.

Is Amarone a region?


Is Amarone the name of a grape varietal?

No, Amarone is not the name of a grape varietal as it is for wines named after the grapes they are made of: for example Souvignon Blanc, Pinot Grigio, Merlot, Cabernet. Amarone is made of a blend of grape varietals that only grow in Valpolicella wine producing region: mainly Corvina, Rondinella and Molinara, but also Oseleta, Croatina, Negrara.


Why is Amarone such a special wine?

At the winery, the cost of a current vintage of Amarone can range from a minimum of 30 euro to up to 260 euro, with average price for a quality product around 50-60 euro. This makes Amarone a quite expensive wine, especially for Italian standards where, when it comes to wines, you generally have good value for money.
The cost of Amarone is mainly due to his particular making process: appassimento and barrel ageing.
With appassimento (grape drying) grapes loose up to 40% of water. Compared with wines made with fresh grapes it means much less wine for the same amount of grapes. In order to be labaled as Amarone, the wine made with dried grapes needs to age a minimum of two years in barrels. Including the drying time, fermentation and bottle ageing, the investment for producing Amarone will be repaid after three years. This time also reflects on the final price. And the best Amarones left in barrel for longer (5-8 years for the best riservas), will cost even more.
Like any product also the popularity of a particular brand will have an effect on the final price, not necessarily connected to production costs and quality, and this is a general market rule. The more consumers are willing to pay a particular label or vintage of Amarone, particularly sought after, the more producers will charge for it.


Where shall I store my bottle of Amarone? 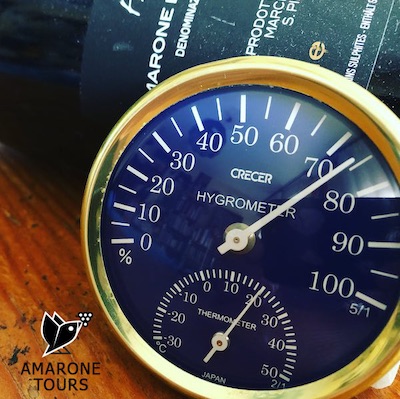 Amarone is a wine that can be stored for many years as long as it is in the right place.
For the storage of Amarone applies the same rule valid for all red wines, involving temperature, humidity, exposure to light, movement and bottle positioning.
Temperature is the most important concern when bottle aging an Amarone. The ideal temperature is 11°C (51°F) to 16°C (60°F). More than the exact temperature it is important to maintain a constant temperature. Fluctuating and fast changing temperatures can quickly ruin wines an allow air inside the bottle. The temperature of the cellar or storage room should change of only few degrees through the year.
Humidity is also important. A humidity range of 50% to 70% will keep the cork of your Amarone moist and properly sealed in the bottle.
Even if Amarone bottles are generally made of dark glass, you should also avoid direct exposure to light. Complete darkness is ideal when cellaring wine. If this is not possible, bottle should be placed in cardboard or wooden boxe or at least covered with a cloth.

Amarone, especially if it is a good one, is always sealed with natural cork and should be stored on its side or at an angle that allows wine to stay in contact with the cork, keeping it from drying out and helping to maintain a tight seal.

An average Amarone can last 10-15 years in a cellar. Leaving it not exactly in the perfect storage place will probably shorten this ageing time, but if you are planning to drink it within few years it should be fine.


How long can I leave the Amarone in a cellar? 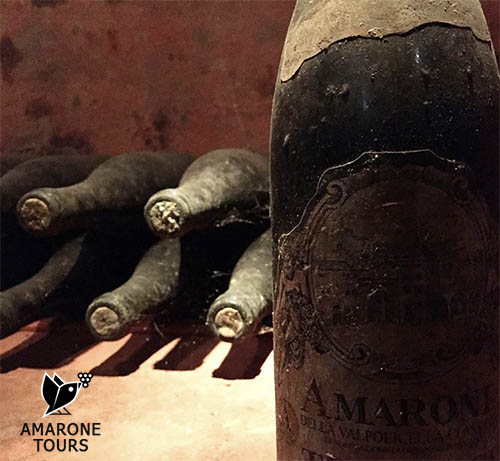 It is often said that you can forget a bottle of Amarone in the cellar.
It is true that Amarone is one of the longest aging wines, but not all the Amarones can age the same way.
The general rule is that the longer an Amarone aged in the barrel, the longer it can age in a cellar after bottling.
With new Amarone’s DOCG rules it is now possible for producers to release an Amarone on the market after 2 years of ageing in barrel. To achieve shorter maturation time, wine makers have to use the French toasted oak barrique that, with its small volume/surface ratio, ensure a faster oxygenation. This helps to shorten maturation time but it also shorten the storage life of an Amarone.
Usually an Amarone aged 2 years in barriques should be kept in cellar no longer than 8-10 years. It is highly probable that your Amarone will be still excellent even after this time span, but if you do not want to risk it is better to respect this limit.
Amarone that ages in bigger barrels for longer time, especially those aging in big un-toasted oak casks, can be left in a cellar for longer time, 15-20 years to be on the safe time, but probably more.
There are wineries in Valpolicella still using traditional wine making techniques that have still on sale vintages from 1960s, and apparently they are excellent. Those vintages aged 10 years in gigantic oak barrels. Today, there aren’t wineries aging their wines for such a long time. Nevertheless the Amarones from those few wineries still ageing wine for 5-6 years in barrel can easily be stored in a cellar for up to 30 years.
That is why, when planning how long you want to keep your Amarone in the cellar it is important to know how the wine has been made.

The vintage is also important in assessing how long you can keep the bottle in the cellar. Not all vintages have the same aging potential. Keep following wine reviews and www.amaronetours.it for Amarone vintage reports.


When is the best time to drink an Amarone?

When you buy a bottle of Amarone it is generally ready to drink. If you brought it back from Italy it is usually better to leave it in proper storage conditions for at least a couple of weeks or better, a couple of months before opening it. Temperature variations and the shaking caused by an airplane flight causes a big stress to wine. Recovering from a jet lag takes longer for a wine than for a human being.

Even if you can drink an Amarone soon after buying it, Amarone is a kind of wine that the longer it stays in the cellar, the better it gets, maturing, mellowing and evolving tertiary and more complex flavors. If a young Amarone usually expresses dried fruits, dried flowers and sweet spices aromas with smooth but present tannins, a longer aged Amarone will get smoother and smoother, developing more perceivable and complex dark chocolate, tobacco, coffee and leather kind of aromas.

An even longer ageing Amarone will keep evolving, developing aromas that modern palates might not appreciate if they are not used to such long aged wines. A wine that aged for 30 years or more will also become extremely delicate and you’ll have to drink it within few hours after opening because oxidation will be very fast.

Please take into consideration these factors when you decide how long you want to leave your bottle of Amarone in the cellar.


How long before drinking an Amarone shall I open the bottle? 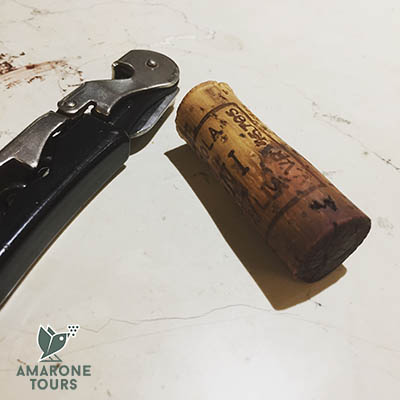 It is often said that you should calculate an hour for each year of ageing in bottle when considering how earlier you have to open a bottle of wine before drinking it. That means that, for example, for a 1959 Amarone (probably the oldest drinkable vintage available on the market), you should open the bottle almost two days before your dinner.
Of course it is not necessary such a long breathing time. Generally 2-3 hours should be enough.

Please also consider how nice it can be to appreciate the evolution of a wine after you opened the bottle during a meal, how it gradually starts to express its perfumes and aromas as you keep on pouring it.
Pouring each time small quantities of Amarone in a proper wide glass and swirling it few times will also help the oxygenation process.


Shall I use a decanter when serving an Amarone?

Amarones, especially those aged for many years in barrels, are very stable wines. After fermentation Amarone remains in stainless steel tanks for few months where it settle before been transferred in barrels where it stays for 2 to 6 years. When it is bottled Amarone is perfectly clear and it is very unusual to find deposit in the bottles even after many years.

Although using a decanter can help reducing breathing time, for Amarone it is definitely not always necessary.


What is Amarone serving temperature?

Temperature is one of the most importan things to take into considderation when serving wine. The wrong temperature can affect dramatically the perception of your drink. Traditional wine serving rules say that the more body and structure a wine has, the higher serving temperature should be. According to these rules Amarone serving temperatures should be those for fuller-bodied red wines, in a range between 18°C (64°F) and 20°C (68°F).
This is true in general but it must be said that there are also other factors that should be taken into consideration when serving an Amarone.
Higher temperatures enhance perfumes and aromas but also make alcohol more perceivable. Modern Amarones tend to be very powerful, with high alcohol content, often above 16% and a lot of body and structure. If you serve a bottle in the high end of the range at 20°C (68°F), considering room and glass temperatures, by the end of your meal the wine will be quite warm, resulting heavy and tyring. It is better to serve Amarone in the lower end of the range, even one or two degrees lower so you will have the wine at the right temperature to enjoy it for the most part of your meal. Amarone is a quite smooth wine and with a slightly lower temperature usually there is no risk to enhance excessively tannins. Moreover if you think the wine is too cold, you can warm it up easily and quickly by holding the glass in your hands. Cooling it down in the middle of a meal it’s a bit more complicate and in many restaurants waiters tend to look down on you if you ask an Ice bucket to cool down a wine like Amarone.


Which is the best Amarone?

He he, there is no easy answer to this question. There are different wine making styles for Amarone, involving grape growing, grapes blend, aging, etc, and every vintage is different. A lot depends also what is the occasion you are drinking Amarone: alone as an after dinner or, as we say here in Verona, as a “meditation wine”, pairing it with food, etc.
In the end, the best Amarone is the one you like best.


How can I know more about Amarone?

Want to know everything, even few well kept secrets, about Amarone? Book one of our wine tours in Valpolicella (where Amarone is made) and in few hours you will become an Amarone expert.